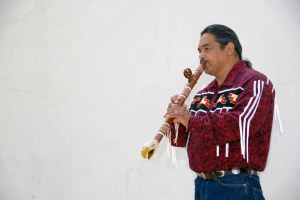 Alex Maldonado to Play at River of Time Museum April 13

The Friends of the Library are pleased to sponsor the award winning Native American flute and drum player/maker, Alex Maldonado, and son, Nick, at the Fountain Hills Community Center on Saturday, April 13th, at 2 p.m., another very special Music in the Library concert.

Alex and Nick Maldonado are a father and son duo who play a mixture of Cultural and Contemporary Native American music. They have been performing together for the past 13 years.

Mr. Maldonado has three LPs to his credit, two of which were nominated for the Native American Music Awards.  Other honors that Mr. Maldonado has received include awards from the Heard Museum Indian Market, Santa Fe Indian Market, Red Earth Festival, Eiteljorg Museum of American Indians and Jackson Hole.  The Smithsonian National Museum of the American Indian in Washington, D.C., has purchased this art, as well as the Music Instrument  Museum in north Phoenix.

As a child artist, Nick Maldonado won “Best of Show” for the Children’s Art Competition at Oklahoma’s Red Earth Festival.  His high style of drumming brings a sense of excitement to the audience and his softer beats add a bit more to each song.

Together, this father and son duo present an energetic and fun performance with a combination of heart racing melodies and haunting “soundscapes”.

This entry was posted in Arts, Culture, Schools & Clubs, Businesses We Love and tagged River of Time Museum. Bookmark the permalink.