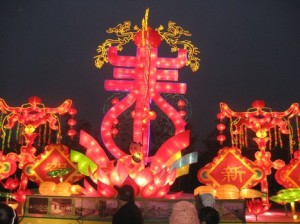 An example of a Chinese Lantern

Fountain Park will be turned in to a swath of color and light as the Chinese Lantern and Folk Festival is held January 31st until February 9th.

Coinciding with the official start of the Chinese New Year, the Year of the Horse, the festival will feature dozens of large, richly-colored lit displays made from special silk material depicting animals, characters, gods, angels, flora and structures. The displays, which will be created by two dozen Chinese artisans, become a stunning kaleidoscope of colorful lights and visuals. A number of displays measure up to 60 feet long and 40 feet wide. The festival will also feature cultural dancing, puppets, food, Tai Chi and Kung Fu demonstrations, handmade crafts and music.

Festival times will be Monday through Friday from 3 to 10 p.m., and Saturday and Sunday noon to 10 p.m. Tickets for adults will be $12, and $8 for children 5-12. Both adults and children will receive a free gift. Children under 5 are free. Business sponsorships are available for displays from $1,000 to $10,000.

Modern lantern festivals have been held around the world in places like Vancouver, Canada, Auckland, New Zealand and Singapore. Lantern festivals are held in a few locations throughout the U.S. The first lantern festival began during China’s Han dynasty (A.D. 25 – A.D. 220.)

“The Chinese Lantern and Folk Festival will bring the colorful and historic Eastern culture to America,” said Festival Director Cathy Hum. “This event will showcase the creative art of lantern making, along with featuring the Chinese arts and way of life.”

“The Town of Fountain Hills it thrilled to host the very first Chinese Lantern & Folk Festival,” said Fountain Hills Mayor Linda Kavanagh. “Our town will be the meeting place for the colorful Eastern traditions and our American traditions. It is also another opportunity to show the world what Fountain Hills has to offer in both its residents, its way of life and our area’s beautiful scenery.”

The Town of Fountain Hills is a master planned community established in 1970. Fountain Hills is surrounded by the 3,500-foot McDowell Mountains and Scottsdale on the west and the Fort McDowell Yavapai Nation on the east. In 2006, Fountain Hills was named by Phoenix Magazine as the best place to live in the Valley of the Sun. Fountain Hills has also earned a top accolade from the February 2009 Business Week, which named Fountain Hills the “Best Affordable Suburb” in all of Arizona. For more information, visit www.fh.az.gov.