Love Letters is a funny and poignant tale of what could have been, of friendship that sustained through the years, and an affirmation of the adage that first love is the hardest to forget. Two friends, rebellious Melissa Gardner and straight-arrow Andrew Makepeace Ladd III have exchanged notes, cards and letters with each other for over 50 years. Through these messages we follow them  from second grade, through summer v 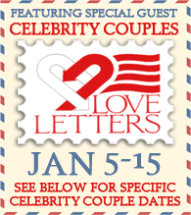 acations, to college, and well into adulthood and discover that though they have spent a lifetime physically apart, perhaps, they are spiritually as close as only true lovers can be.

Each week’s performance features a different celebrity couple, starting with Kurt and Brenda Warner on January 5, 2017, and wrapping up with Mayor Linda and State Senator, John Kavanaugh. Call the theater for tickets, and enjoy a delightful evening in this interesting tribute to lasting love.

Please Note:  Each couple performs one evening only.

Judith and Jay Lawrence: Judith Lawrence, a former USO Entertainer, and Member of Scottsdale, AZ Elks and American Legion Auxiliary, performs with her husband Jay Lawrence, radio and television personality and current member of the Arizona House of Representatives. 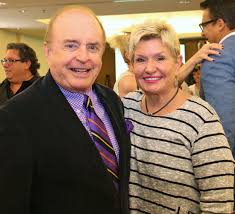 Duffy and Pat McMahon: Duffy McMahon, a contributor to the Arizona Republic Opinion Page and regular guest on both radio and television appears along with her husband Pat McMahon, the multi-faceted actor, producer, recording artist, writer, broadcaster, and one-third of the legendary comedy team that was on TV for 35 years in Arizona, “The Wallace and Ladmo Show.”

Mary Jane and Cory McCloskey: Mary Jane McCloskey is a singer and actress that has a diverse background from jazz to opera.  She appears with her husband, Cory McCloskey who has handled the weather duties on FOX 10 Arizona Morning weekdays from 4:30am to 10am, and during FOX 10 News @ Noon since 2001.

Erika and Steven Hunter: Former NBA and The Phoenix Suns star who is currently the Phoenix Suns’ ambassador to Arizona and his wife Erika perform.