The Ancient Mystery of the Casa Grande Ruins

Love a good mystery? Just an hour south of Fountain Hills, the Sonoran Desert holds one of the greatest mysteries of the ancient world.  The Casa Grande Ruins tells the story of nearly 2,000 ancient peoples known as the Ancestral People of the Sonoran Desert who occupied a massive compound for about 1,000 years before vanishing in the 1400’s. 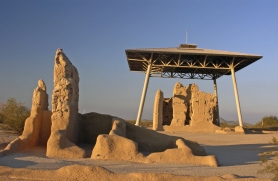 For over a thousand years, the Ancestral People of the Sonoran Desert inhabited the area around present day area of Casa Grande and Coolidge between 300- 1450 C.E.  In 1350, the Great House known as Casa Grande was built. Over 2,000 prehistoric farmers lived in the village, tending crops irrigated with water from the nearby Gila River diverted through extensive channels and canals. Then in 1450, the Hohokam vanished without a trace.

Since the Ancestral People of the Sonoran Desert left behind no written language, all that remained of this ancient culture were the ruins of villages, irrigation canals, and various artifacts. The only historic accounts of the Casa Grande ruins begin with the journal entries of Padre Eusebio Kino when he visited the ruins in 1694.

Visit the Casa Grande Ruins to see what life was really like for the ancestral people of the Sonoran Desert. Stroll the site with a guided tour as the park rangers depict the life of these ancient people, and envision history come alive. Throughout the tour, see the outlines of several out buildings where the families lived, stored their grain, and where children played ball inside the walled compound. Bring your meal and enjoy the park grounds while you eat. The park picnic area is open from 9:00 am to 5:00 pm daily.

Follow State Hwy 87 from Fountain Hills south 69 miles to the gates of the Casa Grande National Monument.  Guided tours from May through October are offered as staffing, weather, high temperatures, and group size allows. Entrance Fee for is $5 for ages 16 years and older. Children 15 and younger are free.  For more information, go to https://www.nps.gov/cagr/index.htm.